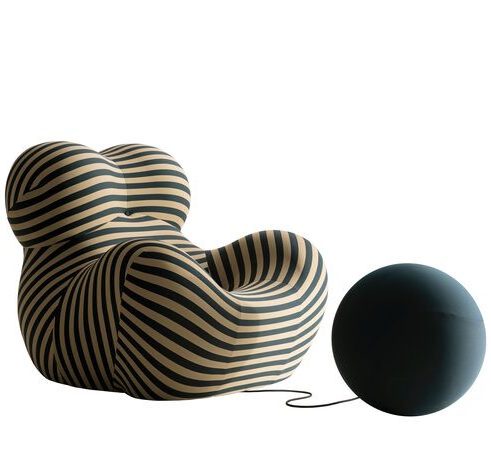 Designed by: Pesce G
Co-Designed by: -
Designer: Gaetano Pesce
Co-Designer: -
Date of Design: 1968
Date of Manufacture: 1969
Decade: 1960s
Region: Europe
Significance: Delivered flat-packed and pops-up
Manufacturer: B and B Italia
Material: Polyurethane
Process:
Monobloc: No
Cantilever: No
Renewable Carbon: No
Weight:
Note: Country of origin: Italy. Image: B&B Italia (then known as C&B). The image of a ball and chain, created by the ottoman attached to the chair, ensured that the Up5 would create controversy from its first appearance at the Milan Furniture Fair in 1969. The ‘ball and chain’ was known as common slang for wife, however, Gaetano Pesce (1939- ) insists the design is a reflection on how women were seen by society at the time. Perhaps the first chair designed to deliver a political message. Half a century later the debate still rages with a feminist group attacking an eight-metre high version of the Up5 armchair and Up6 footstool which were installed in Piazza del Duomo in the city centre, during the Salon de Mobile, in 2019. The Up5 emerged as disc just four inches (10 cms) thick covered with jersey nylon, which expanded to ten times the size, dramatically popping up from the floor when removed from its PVC envelope, a process which would take about an hour. ‘A happening in the living room, a performance at home,’ said Pesce. The bulbous shape was reportedly inspired by silhouettes of ancient fertility goddesses. The breasts and thighs form an enveloping form for the sitter; recreating the feeling of security associated with mother and the womb. The controversy surrounding the design ensured it quickly became well known, with a range of names used to describe it: Big Mama, Donna and La Mamma. Production ended in 1973, as it was realised that Freon, the leavening ingredient added to the polyurethane, was harmful to the ozone layer. Production resumed in 2000 with a Freon free version (Bayfit cold flexible polyurethane) which, sadly, no longer arrives vacuum packed. The Up5 is often heralded as one of the most successful products of industrial design, examples are held in virtually all the leading design museums around the world.