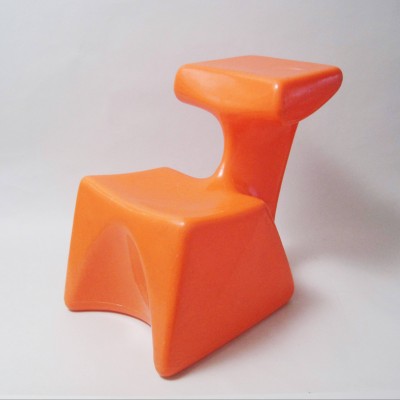 Designed by: Colani L
Co-Designed by: –
Designer: Luigi Colani
Co-Designer: –
Date of Design: 1971
Date of Manufacture: 1972
Decade: 1970s
Region: Europe
Significance: Designed for children to stimulate their imagination
Manufacturer: Top System Burkhard Lübke
Material: Polyethylene
Process: Injection moulded
Monobloc: Yes
Cantilever: No
Renewable Carbon: No
Weight:
Note: Country of origin: Germany. Image: Vntg. Is it an animal toy, part of a cockpit from a futuristic spacecraft or just a kid’s chair? The influential German Designer Luigi Colani was commissioned to design the Zocker following a child and environment (Kind und Umwelt) symposium at the International Design Center Berlin (IDZ) in 1971. Increased prosperity and social unrest during the ’60’s prompted new thinking around raising children and the implications for the world of design were discussed at this symposium. Manufacturer Burkhard Lübke was inspired by the event and sought to create, ‘a child-friendly piece that was more than just a scaled-down piece of adult furniture.’ Designed in 1971, the Zocker was manufactures by Top System Burkhard Lübke, Gütersloh, Germany and was in production from 1972-1980. An adult version was added to the range the following year. The hollow design is made from polyethylene, was claimed as the first uses of this plastic by the furniture industry, although Richard Sapper and Marco Zanuso had used the same material for their children’s chair, K4999/5, in 1964.