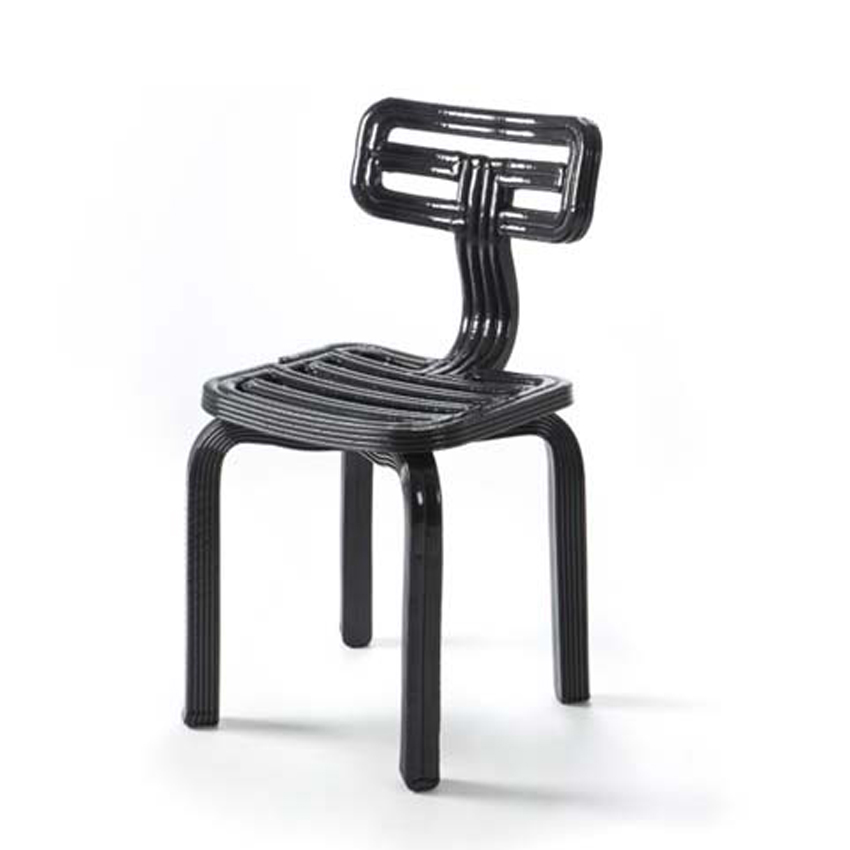 Designed by: Vander Kooij D
Co-Designed by: –
Designer: Dirk Vander Kooij
Co-Designer: –
Date of Design: 2012
Date of Manufacture: 2012
Decade: 2010s
Region: Europe
Significance: 3D printed using extruder on robotic arm fed with recycled refrigerator components
Manufacturer: Dirk Vander Kooij
Material: Polypropylene
Process: 3D printed
Monobloc: No
Cantilever: No
Renewable Carbon: Yes
Weight: 9
Note: Country of origin: Netherlands Image: Dirk Vander Kooij. EPRP score = 7 (below average). Dutch designer Dirk Vander Kooji became fascinated by early 3D printers aimed at the consumer market while he was at college. The designer acquired an industrial robotic arm (due for retirement from a car production line), added an extruder, modified the software, designed and printed a chair, all within eighteen months (and while completing his undergraduate degree). His Chubby Chair looks like it is piped straight from an icing bag or squeezed from a tube of toothpaste. The wide range of vibrant colours available also adds to the playfulness of the design. The low-resolution finish enabled production to be optimised to print up to 40 times faster than standard 3D printing at that time (2012). A chair that weighs 9 kg can be produced in 3 hours. The Chubby Chair is produced in two parts, with the legs bent into shape after they have been printed and then bolted to the shell by the end-user, delivering savings during transport. Material to manufacture Chubby Chairs is recovered from refrigerators; the white plastic (HDPE) interiors are stripped and pelleted to provide feedstock. The designer claims the provenance of the material was more important in its selection than environmental concern. As an added environmental bonus, unsuccessful designs (or rejected prototypes) can be pelleted and re-cycled back into the manufacturing process.