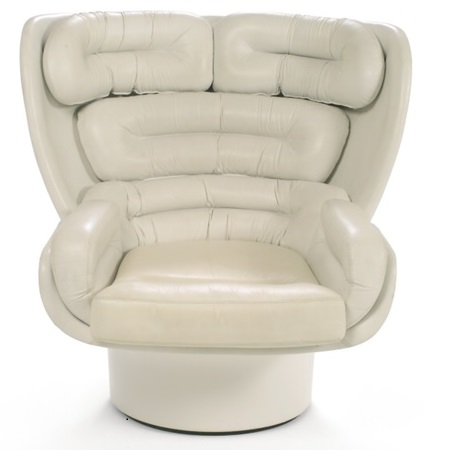 Designed by: Colombo J
Co-Designed by: –
Designer: Joe Colombo
Co-Designer: –
Date of Design: 1963
Date of Manufacture: 1965
Decade: 1960s
Region: Europe
Significance: Largest self-supporting chair (at time of release)
Manufacturer: Comfort
Material: Polyester
Process: Pressure moulded
Monobloc: No
Cantilever: No
Renewable Carbon: No
Weight:
Note: Country of origin: Italy. Image: Longhi. The Elda was Colombo’s first chair and was named after his wife. Designed from 1963 the chair did not make into production until 1965 and has been continuously produced since then by Comfort Fratelli Longhi. The chair features a moulded fibreglass reinforced two-piece plastic shell (available in black or white), which was the largest self-supporting chair produced at that time and probably the first time this material had been used for an armchair. The flaring barrel shape was inspired by the hulls of boats and nautical techniques were used to construct it. The Elda can rotate a full 360 degrees on its metal base. Contrasting with the smooth futuristic exterior the interior was developed to provide exceptional comfort. Seven, expanded polyurethane foam, padded tubular leather cushions, attached to the shell with metal hooks allow for plenty of movement across the generous width of the chair. The curved shell acts a cocoon for the sitter, embracing them and muffling surrounding sounds to create a protected and cosy atmosphere. The Elda has remained a Hollywood favourite featuring in films such as The Illustrated Man, a James Bond movie, The Spy Who Loved Me and the Hunger Games. Elda’s have also been spotted in the TV series Space 1999 and on Star Trek.