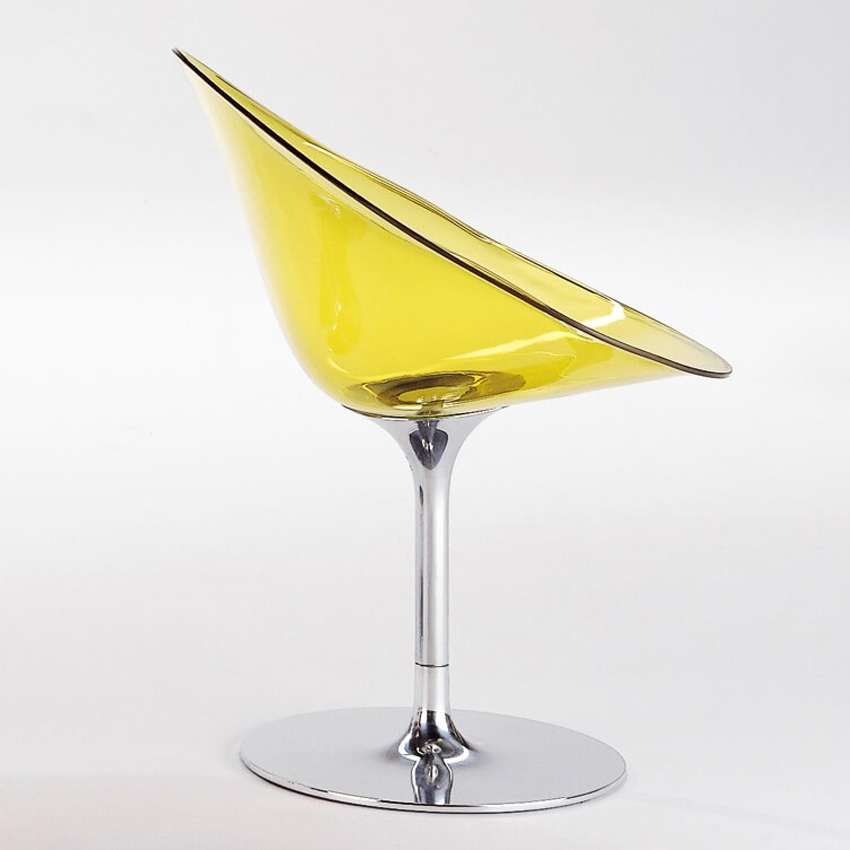 Designed by: Starck P
Co-Designed by: –
Designer: Philippe Starck
Co-Designer: –
Date of Design: 2001
Date of Manufacture:
Decade: 2000s
Region: Europe
Significance: Pedestal chair with organic inspiration leveraged to increase efficiency
Manufacturer: Kartell
Material: Polycarbonate
Process: Injection moulded
Monobloc: No
Cantilever: No
Renewable Carbon: No
Weight: 7.65
Note: Country of origin: France (designer), Italy (manufacturer) Image: Kartell. The Ero|S| probably looks familiar. Even if you have not seen the design before there are clear historical references to previous chairs. The organic egg shape seat is reminiscent of 1960s pop design (for example, see Luigi Colani’s Poly-COR), while the four-legged chrome plated base is very similar to the Eiffel Tower structure developed by the Eames’ for their plastic chairs, way back at the start of the 1950s and the pedestal base is reminiscent of Saarinen’s Tulip chair. In seeking inspiration from the organic designs of the 1960s Starck’s Ero|S| chair marks the start of a new period of organic influence in design. However, the designers’ interest often moves from beyond the physical appearance of the chair to learn from nature the secrets of economical construction. Ero|S| is a swivel armchair designed for use at home, in dining or living rooms, or in the office, in meeting rooms or waiting areas. Two versions are available. In addition to the four-legged base the chair is available on a glossy aluminium rotating base with a single column central support. The shell, made from polycarbonate, comes in a choice of colours. Kartell have manufactured the chair continuously since it introducing it to their range in 2001.