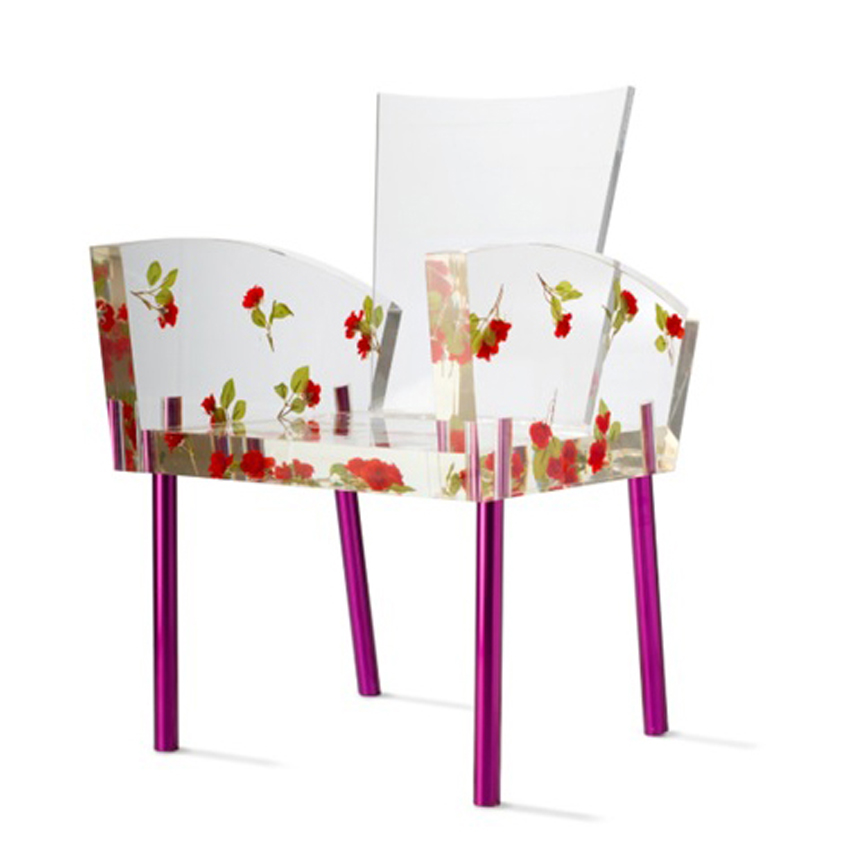 Designed by: Kuramata S
Co-Designed by: –
Designer: Shiro Kuramata
Co-Designer: –
Date of Design: 1988
Date of Manufacture:
Decade: 1980s
Region: Asia
Significance: Plastic flowers floating in acrylic glass to form one of the most highly sought after plastic chairs (limited edition of 56).
Manufacturer: Ishimaru Company
Material: Acylic glass
Process: Pressure moulded
Monobloc: No
Cantilever: No
Renewable Carbon: No
Weight: 70
Note: Country of origin: Japan. Image: Phillips. The body of the chair made from a sheet of acrylic resin while Miss Blanche’s thin, elegant legs are simple amethyst-coloured aluminium rods screwed directly into sockets formed in the acrylic. This visually simple construction turned out to be such an exacting process that many of the craftsmen involved refused to work with the designer again. Trial and error determined how the acrylic sheets were made. First a single-use mould was made from galvanized sheet steel and half of a four gallon (18 litre) drum of acrylic resin was poured in. Air bubbles had to be suctioned off from the artificial flowers while they were held in the required pattern with tweezers until the resin hardened sufficiently to support them. Inexpensive artificial flowers were eventually selected for the design after experiments with real and expensive artificial ones failed. Real flowers turned black as they were burned by the resin and the dye used in expensive artificial blooms bled into to the acrylic, which the designer regarded as fake glass. What makes this chair truly outstanding is the emotional response it elicits from the viewer. The roses suspended in mid-air, casting shadows on adjacent walls or floors. Even without knowing the name or history of the chair the viewer understands it is about faded beauty and the frailty of love, Kuramata connects directly with his audience, retelling the story of the Streeetcar named desire through a chair. Released in a limited edition of just 56 Miss Blanche is one of the most expensive plastic chairs available, with copies fetching over half a million Australian dollars.