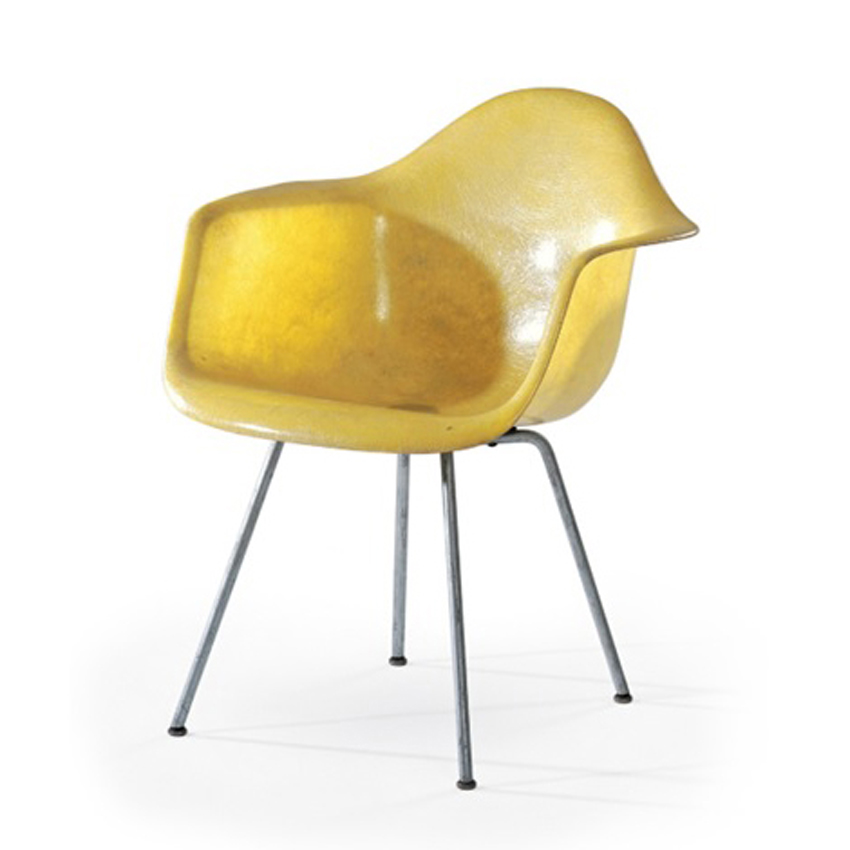 Designed by: Eames C
Co-Designed by: Eames R
Designer: Charles Eames
Co-Designer: Ray Eames
Date of Design: 1948-50
Date of Manufacture: 1950
Decade: 1950s
Region: Americas
Significance: First shell chairs
Manufacturer: Herman Miller Furniture Company
Material: Polyester
Process: Pressure moulded
Monobloc: No
Cantilever: No
Renewable Carbon: No
Weight:
Note: Country of origin: USA. Image: Vitra Design Museum. The Eames team sought to develop the shell for a chair from a single piece of material. First experimenting with plywood followed by sheet metal before succeeding with fibreglass. Starting in 1948, the Eames Office worked with Zenith Plastics to handcraft prototype chairs in fibreglass-reinforced polyester resin. Fibreglass could be easily moulded to extreme shapes using simple moulds that did not require heat or pressure and formed a rigid, hard wearing structure once set. The DAX chair (Dining Height Armchair X-Base) made its debut at the Low Cost Furniture exhibition at MoMA, in spring 1950 (having won second place in the 1948 competition of the same name) and entered production the same year. This innovative production technique allowed for low-cost production of the polyester resin shells which helped insure these deigns became very successful (even before they were widely copied). The now ubiquitous side chair (DSR – Dining Height Side Chair Rod Base) was launched the following year. The continued success of the range allowed led to the development of a lightweight stacking chair (DSS) which was added to the range in 1954. The seat and backrest of all three models could be moulded in a single piece and easily incorporate the compound curves needed to provide comfort. A shell took three minutes to mould at a temperature of 130 degrees C under pressure ranging from 100 to 150 psi, which then had to be trimmed and buffed by hand, before being joined to the base. In another first, the chairs were launched with a range of bases allowing for a variety of designs to be created to fit specific settings and included the RAR (Rocking Armchair Rod Base). In contrast with Saarinen’s 70 Series, Eames left the fibre-reinforced resin fully exposed, highlighting beauty and tactile qualities of this material which was new to the furnishing industry. Charles and Ray Eames developed a range of colours to be added to the resin, another first as fibreglass had previously been reserved for use in military applications where colour was not a primary concern.